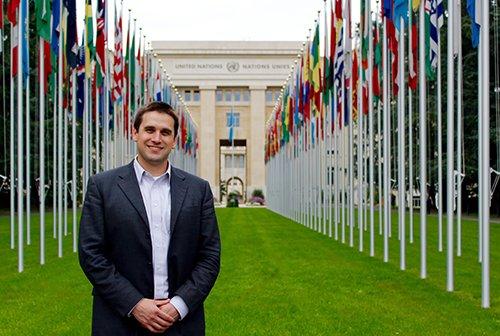 In August 2015, I had the privilege of serving as a student intern for the United Nations Committee on the Elimination of Racial Discrimination (CERD) in Geneva, Switzerland. I am currently a 3L law student at the University of Oklahoma and completed the internship between my 2L and 3L years. I became aware of this opportunity through OU Professors Alvaro Baca and Lindsay Robertson. They connected me with Mr. Francisco Cali Tzay, the Chairperson of the CERD. Eligibility for this internship consisted of several required classes including Indian Law, Comparative Indigenous Peoples, and preferably an International Law course of some kind.

As an intern for the United Nations CERD, there was work to be completed both prior to and during the internship. Before departing for Geneva, I assisted the chairman in preparing summaries of each country report prior to when the CERD sessions began for the summer. Once I was in Switzerland, I directly assisted Mr. Cali and attended daily meetings of the committee. During each session, one of the eight participating countries presented their annual CERD document, highlighting both the challenges and progress their country has made regarding racial equality and discrimination. The participating countries included Norway, the Netherlands, Niger, Suriname, Costa Rica, Colombia, the Czech Republic, and the Former Yugoslav Republic of Macedonia. I was specifically in charge of taking notes on each individual country report in order to support Mr. Cali's analysis of each country's report before the committee's response and recommendations were made the following day.

This experience was both challenging and extremely rewarding. While the specific tasks were tedious, they truly carried great importance. This UN committee meets for a very short period of time twice a year. However, it is apparent that even in this short time, these countries can be significantly impacted in a positive way. It was gratifying to watch how progress is made in the realm of racism and discrimination. It is even more clear to me now that simple laws and policies can have further reaching effects than one may realize.

This experience will definitely shape my perspective for the remainder of my law school experience and beyond in my professional career. As a law professional I will undoubtedly interact with clients from numerous cultural backgrounds. This internship experience has strengthened my level of cultural competency and awareness of the fact that cultural background is often a positive driving force behind decisions my clients may make. My time in Switzerland enabled me to understand law and policy formation from a different perspective than what I have experienced in the United States.

Tax law has predominately been my focus throughout my law school education, and my professional career plans currently center around tax law. Nevertheless, this internship experience has given me international perspective on the issues that the countries in the UN are dealing with on a daily basis. Eliminating racism and discrimination is an ongoing endeavor that is relevant for all law professionals to focus on. This awareness has given me a wide lens perspective that can be carried into any field of law that I may choose to practice in the future.